This morning, my brother pointed me toward a very excellent rant by Steve Yegge about what he calls the “shit’s easy” problem. The essay is worth reading in full*, but his basic point is that just because you can imagine something, that doesn’t mean you can implement it. Something that seems easy in theory can get very hard very fast, once you start considering things like use cases, interactions with other complex systems, and the like. He’s got two extended examples – implementing credit card “buckets” for categories of spending, and legalizing marijuana – that will show you exactly what he means. Both of these examples are things that you can easily imagine, but that get very hard once you have to actually do them.

I, of course, struggle with the opposite of the “shit’s easy” problem – namely, with the thing we like to call creativity. “Shit’s easy” is what happens when something is harder to implement than it is to imagine. “Creativity,” I’d argue, is what happens when the opposite is true. When we have a hard time imagining how to accomplish something, and yet we have the evidence that it has been done, we call it creative**.

What we’re talking about in both cases is cognitive dissonance – a difference between our expectations and the reality of getting things done. When things are about as hard to do as they are to imagine***, there’s nothing that requires explanation. We aren’t provoked to curiosity.

When things are easier to imagine than implement, we can’t understand why it doesn’t just get done. “What could be wrong?” we groan. “Shit’s easy!” Cue irritated explanations of system complexity.

When things are easier to implement than imagine – which may just be because they are very hard to imagine – we can’t imagine how it did get done. “Whoa!” we say. “That was so creative!” 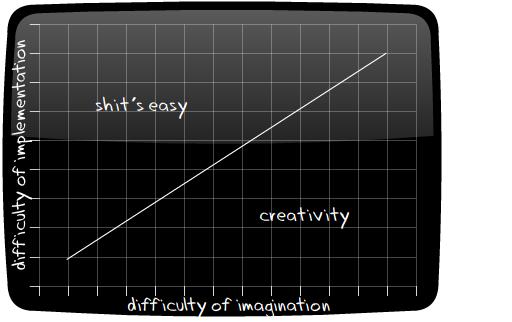 Of course, that gets at a deeper question: what is easy or hard for us to imagine?

* Okay, you can skip the bits where he’s telling you just how awesome he is. Yes, he’s doing it rhetorically to assure the reader he isn’t speaking defensively. Yes, it will probably also annoy you.

** Obviously this is a testable hypothesis. I’d love to test it at some point.

*** Note that this implies some interesting predictions about the impact of expertise on creativity evaluations – and, for that matter, on “shit’s easy” syndrome.

**** The best defense against the “shit’s easy” problem, by the way, is a dozen or so years of Talmud study. Talmud is allllll about the implementation details.

My full CV is available here.

My Google Scholar page is here.

I can be reached by email at hammerj at andrew dot cmu dot edu, or you can set up a meeting online.